Mourinho took a lot of stick two weeks ago for his criticism of the players for the loss in Belgium to Antwerp, but why is it that they shouldn’t be able to take responsibility for their performances.  Maybe some home truths and discipline might shake them up.  Dele Alli has been singled out by the media as bearing the brunt of Mourinho’s ire, but he hasn’t been playing well.  The “All or Nothing” documentary may have carried the first hint that Jose wasn’t sure about Dele, but his talk with him about looking back on his career that didn’t realise it’s potential was one that should have prompted some serious thinking.  After Tanguy Ndombele’s renaissance after a shocking first season, it shows what some fight, determination and desire can achieve.  The French midfielder was a buy under Mauricio Pochettino and maybe the way he approached the game wasn’t for Mourinho.  Much has been printed in the media that it was Daniel Levy, who talked Ndombele around, but it is the manager’s decision on who plays and Jose’s work with Tanguy has made him almost a first pick.  And that may be at Dele’s expense.

The lockdown period and the short pre-season has left players in different levels of fitness.  Some look as though they have put on a bit of weight, some look like they have been rigorous in their fitness regimes during the curtailed close season … and then there is Dele. 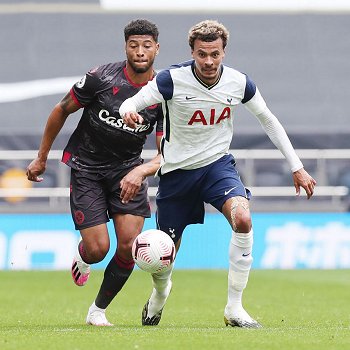 Where he was once a youthful bundle of energy, running everywhere and enjoying his football, he now doesn’t seem to possess that energy.  He looks sinewy and his face is drawn, almost as if he has been training too much.  His sheer enjoyment of playing seems to have evaporated.  Following Jose’s initial assessment in “All or Nothing” that Dele wasn’t a good trainer, perhaps he has now gone the other way.  It almost looks like he has been ill.  Losing his physique, either by over- or under-doing it will affect his performance.

But his fitness isn’t all that has contributed to his current absence from the Tottenham team.  His form towards the end of Pochettino’s reign at Spurs wasn’t good, but it seemed to pick up after Mourinho arrived.  That first game at West Ham, with his spin on his hip while on the floor to play his part in the first goal showed how inventive he can be and his game seemed to have returned, but the tail end of the season saw his performances tail off.

The players were taken aback when Mourinho was appointed, but they all realised that he was a winner and there must have been the realisation that he didn’t get to that point by being a nice guy.  Well, that probably doesn’t just want his players to be a “bunch of ****s”, but Mourinho himself will not have got where he has in the past by being a Mr. Nice Guy.  That means, as a manager, having to make difficult decisions and that might not have been something that Dele was on the receiving end of from Poch.

They say that some players need a kick up the backside while some need an arm around the shoulder, well, Jose seemed to try the latter with the, “Are you Dele’s brother ?” question.  With no return to his top form, Mourinho will pick those who are doing it for him.  Motivation is a very personal thing, but the player must be able to motivate himself at times and Dele needs to prove he can contend with those who are in competition for his place in the side.  I think Jose was trying to advise him that if he wants to enjoy the superstar lifestyle, he has to earn it.

The rehabilitation of Tanguy Ndombele may have pushed Dele out of the side, as has the arrival of Pierre-Emile Hojbjerg.  The Dane isn’t a direct replacement for Dele’s place in the team, but being the sort of player Mourinho likes to sit in front of the back four and break up play, using short passes to launch attacks has changed the way Tottenham play means that the players in front of him have to be mobile and effective with the ball.  More recently, Dele has been neither.

The much-feted link-up play between Dele and Harry Kane has now been replaced by the almost telepathic play between Kane and Son, something that went missing when Dele’s form dipped.  Where the flicks and tricks were coming off on a regular basis, they now leave the player looking like he can’t make a pass … and that is sad, as he has massive talent.  Dele hasn’t been totally 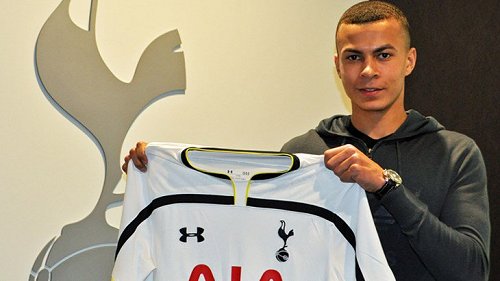 frozen out of the picture, getting some time in the Europa League matches, but he has not shown enough in them to force his way back into the Premier League picture.  And with Harry dropping deeper into the hole, providing the chances for Heung-Min Son, he doubles up in Dele’s old position, playing two roles in the side as scorer and creator.  Thus, the need for Dele is reduced.

It should not be forgotten that he had had a difficult few months off the field.  Firstly, there was the racist social media post, where he was caught ridiculing an Asian man over a “joke” about Covid-19 at an airport, getting a one-match ban and a £50,000 fine, as well as having to attend an educational course on diversity.  While Alli is still young, he needs to be aware of what goes out on his or his friends various social media accounts can rebound on him.  Secondly, he got robbed during the first lockdown, being in the house at the time.  It must have been a scary experience and one that may have had an effect on him at a time when we were all in a period of isolation.  While he is not the young, fresh-faced kid that joined Spurs back in 2015, he has now developed into one of the top players in the Premier League.  His body will have changed over that time, but has his attitude ?  Losing that edge that he had to his game, bordering on the ‘nasty’ side, may be the missing ingredient at the moment.

Rumours of a loan or even a sale to Paris Saint Germain are fuelled by media speculation, which, I suppose, would be the endgame should Jose feel that Dele is not able to recover his past glories.  Yes, we would get a sizeable profit on the £5 million we paid MK Dons for him, but would it cover buying a replacement ?  He appears to be a popular member of the squad and while Jose might be ruthless, letting a player of his potential leave would not be on Daniel Levy’s agenda, but the bottom line is that it is down to Dele to realise that potential. 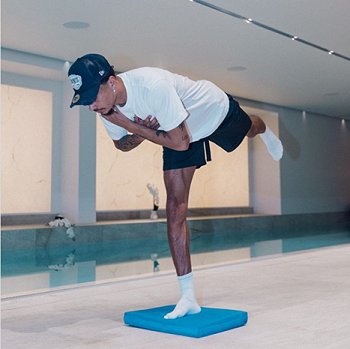 I hope that he can regain the style of play that he had where he made those runs into the box to get on the end of Toby’s booming diagonals or to tuck away balls played back to him from the dead-ball line.  The loss of his England place must hurt as well, as he sees players in the team who do not possess half the talent he has.  What they might have that he does not is the determination to make them hard to drop.  Henderson ?  Barnes ?  James Ward-Prowse ?  Phil Foden ?  Kalvin Phillips for goodness sake ?  Dele should be head and shoulders above these and others who threaten to take his crown.

The latest Instagram message from Dele, stuck at the training ground during the international break, sheds a light on how is is approaching the situation and it is good to hear that he looks as though he is ready to make his mark in the squad once more.  “Make improvements, not excuses”, he states, along with the photo – right.  Let’s hope that he doesn’t need excuses, as his ability will do his talking when he gets back in the groove.

Here’s to a resurgence in his career at Tottenham and to hearing his chant echo around the ground when we are allowed back in.