The picture on the cover of the 1992-3 Spurs handbook showed the club’s five summer signings; players bought to boost the quality of the squad (now under new First Team coaches Ray Clemence and Doug Livermore) and help Tottenham improve on their 91-2 final position of 15th – our lowest top flight finish since the return to Division One in 1978. The five players went on to have varying degrees of success at White Hart Lane. 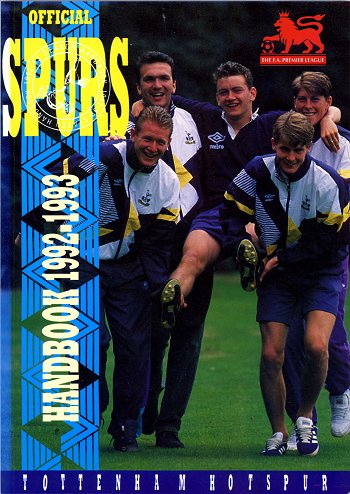 Neil Ruddock, who cost £750,000 from Southampton and who was returning for his second spell with the club, Darren Anderton (a £1,750,000 buy from Portsmouth) and Dean Austin (£375,000 from Southend) all established themselves as regular first teamers during the 1992-3 campaign, whilst Gerard McMahon (£100,000 from Irish club Glenavon) had to wait nearly two seasons for his league debut for the club before enjoying a brief run in the first team at the start of 95-6. The fifth member of the quintet, however, striker Peter Beadle, failed to make a single first team appearance for Tottenham.

Beadle had joined Spurs from Fourth Division Gillingham. He had come through the ranks at the Kent club and made his debut in March 1989 as a substitute whilst still only sixteen years of age, in a 1-2 home defeat by Cardiff. His only start for the Gills in the 1988-9 season came four days later in a 1-6 defeat at Wolves. Beadle returned to the first team at the start of the 1989-90 season, mainly due to an injury crisis at the club, which was now in the basement (where it would remain until 1996), following relegation at the end of the previous campaign. During his four year Gillingham career Beadle made seventy six appearances for the first team (including a fair few as substitute), scoring sixteen goals.

Beadle was hyped up as an excellent prospect who could go all the way to the top (at the time he was the most bankable asset that the financially struggling Gills had and they were keen to promote him and up his value in the transfer market accordingly) and in the 1991-92 season he was watched by several top clubs. It was common knowledge amongst the Gillingham supporters for much of that campaign that Beadle would be leaving and that Tottenham had first option on buying him (the likelihood of Beadle’s move to Spurs was mentioned in this very publication during the 1991-2 season).

In June 1992, Peter Beadle duly made the move to White Hart Lane. The transfer fee was set at £300,000, a club record at the time for the Gills. There were additional clauses built into the deal which would see Gillingham getting further payments, one related to Beadle’s first team appearances for Spurs and another if Beadle went on to play for England! There was also a sell-on clause with the Gills getting a percentage of the fee if Beadle moved on. In the event that Beadle was a success at Tottenham, the final transfer fee would have risen to more than half a million pounds.

Darren Anderton and Gordon Durie began 92-3 as the first team strikers at White Hart Lane. Soon after, Teddy Sheringham joined the club from Nottingham Forest and not long after that, Nick Barmby forced his way into the side. Peter Beadle was well down the pecking order, but he was still young and no doubt hadn’t expected to get into the first team immediately, seeing as he had moved up three divisions. He may well have hoped for at least the odd appearance as substitute, after all he had cost quite a bit of money, but he was left to ply his trade in the Football Combination. Beadle could have done with one of those meaningless pre-Cup Final league games that Tottenham have been forced to play over the years, such as the match at Southampton a couple of days before the first leg of the 1984 UEFA Cup Final, when the reserves would be drafted into the first team en masse, as he might have got a game. Arsenal’s 1-0 win over us in the Wembley FA Cup Semi-Final in 1993 put paid to any such opportunity during Beadle’s first season. At the tail-end of 92-3 Beadle had a spell on loan with Bournemouth, scoring twice in nine games.

1993-4 saw the six foot Lambeth born Beadle’s Spurs career continue in the same vein – his only first team appearances coming during a loan spell at Southend. By this time, we had signed Jason Dozzell and Ronny Rosenthal, thus further reducing Beadle’s chances of making the first team at White Hart Lane. After two seasons and no first team appearances at Tottenham, the club allowed Beadle to move to First Division Watford in September 1994 for an undisclosed fee which was believed to be only £5,000, so there was not much of a sell-on bonus for the Gills . At least he made the first eleven at Vicarage Road – however, he only scored once in the twenty five games in which he played for The Hornets (although eleven were only substitute appearances). By the end of 1995 Beadle had moved down another division, having joined Bristol Rovers. At least Watford managed what Tottenham had failed to do, make a profit on Beadle, as he signed for The Pirates for a £30,000 fee. Since that time, Beadle has established himself as a good lower division striker and scorer of the odd spectacular goal on Sky live games. After making over 100 appearances for Bristol Rovers, scoring thirty nine goals, Beadle joined First Division Port Vale for £300,000 in August 1998. He didn’t stay at Vale Park for long and a further move followed in February 1999 when he signed for Notts County, this time for £250,000. He began this season at the Meadow Lane club, but has since had a spell on loan at Second Division Bristol City and now that move has been made permanent.

These recent moves maybe indicate a difficulty in settling down at a new club, which is perhaps why Beadle failed to make the grade at White Hart Lane. On the other hand, as he has found most success whilst with lower division clubs, it is possible that Peter Beadle was never good enough to be a top level striker, something that Tottenham perhaps realised, releasing him after persevering with him for only two seasons. The signing of Peter Beadle was just one gamble that Tottenham took that failed to come off.