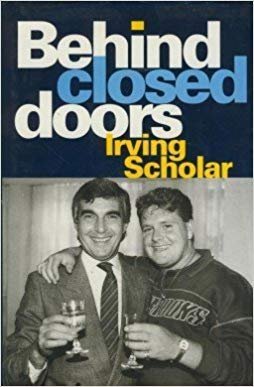 As we are on the eve of potentially the greatest day of Tottenham’s history (playing the the Champions League Final), this book takes us back to a time when things weren’t so rosy for the club and gives an insider’s view from the Chairman at the time, who tells of what went on “Behind Closed Doors”.

Some of the content sounds pretty familiar. A ground redevelopment – a team in a Cup Final – behind the scenes transfer dealings – TV deals. But this is 1984 and a period of one of the darkest in the club’s history, written by the man who was labelled as the one responsible for Tottenham Hotspur Football Club almost going out of business. His view is very different, as you might expect, but the journey from winning the 1984 UEFA Cup to winning the 1991 FA Cup is a painful one to relive and knowing what we know now, a read that is not an easy one, but one that is fascinating.

This is former Chairman Irving Scholar’s view and others might have a different tale to tell. Some have told it in other books and others via media outlets, but Scholar has put it all out there for readers to form their own opinions. He gets support from some Spurs fans at games, but has doubts about his position when dealing with his peers.

The background to the financial aspects of the club can get a bit bogged down in legal detail, but those are the rules of the Stock Exchange. Venables and his associates are painted as bidders to save the club without any solid financial backing, while others flit in and out of the picture, with various degrees of serious intent in buying the club.

With the issues flying around at the time – ID cards, Hillsborough, Heysel, Bradford – it was a tough time for football, with challenges on and off the pitch, but also in the boardroom. The diversification of business away from football caused great financial strain and the running of the various enterprises were almost working in secret without revealing the depth of trouble they were in to the plc. The covert discussions about the financing of the club and deals taking place around it all become even more cloak and dagger with codewords and pseudonyms used to cover any leaks of what was really going on. Not that Jeff Powell of the Daily Mail could be kept out of the loop, using his insiders to report the story to the football public.

The David Pleat scandal rocks the club and is another crisis that the Chairman has to deal with and leads to an immediate foreign flight to secure the services of a new manager. But despite the lengths gone to for Tottenham to get their man, he has an attitude that sometimes leaves Scholar cold. His love for Spurs is something that he holds dear and cannot always understand when others don’t show the same level of commitment.

Fellow Director Paul Bobroff was obviously someone that Scholar later felt that he should not have jumped into bed with. But then, he makes clear his favoured associates and those he does not have time for in the book. Factions within the board see rifts develop that appear very difficult to heal. With personal agendas coming to the fore, the interests of the football club almost appear to take a back seat with individuals intent on making themselves look good or just wanting to make sure their little victories were won.

The “who we could have bought” transfer talk and how the deals actually work (and who makes the decisions about whether they go ahead or not) are possibly the most interesting part of the book, but the costs incurred in trying to keep the club funded by the Midland Bank, costs of the delayed completion of the East Stand and how the game was postponed on the morning of the opening home game of the season all show that with people going off on frolics of their own, the lack of unity in the club’s board almost brought it to its knees.  The negotiations between Spurs and Lazio and the banks indicate just how close the club came to going to the wall.

While some aspects of the book seem as relevant as today, in some respects the game is a million miles from that of 2019. It is before modern football began (i.e. pre-Premier League) and things were done very differently.  One comment sums it up … “The terms were generous : a three-year contract with a commencing salary in the region of 150,000 p.a., which was to make him (Venables), I believe, the highest paid manager in the first Division. In addition to that, a signing on fee of 50,000 was to be paid.”

If you were there, you will re-live the horrors of the era.  If you weren’t, then this is a book that will show you things you weren’t aware of, amaze, frustrate and grip you.