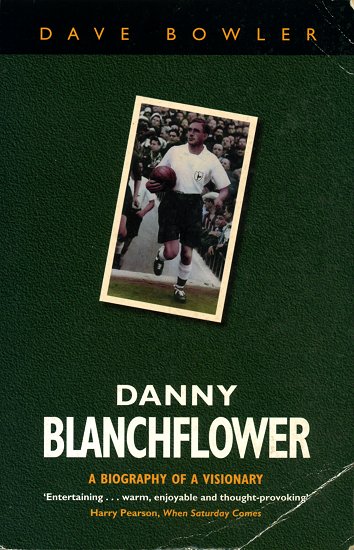 Danny Blanchflower – A Biography of a Visionary

The man who was partly responsible for putting the Glory into Tottenham Hotspur is under the microscope in this book. There are so many stories about Danny Blanchflower during and after his playing days that one book could not hope to cover everything in this man’s life, but there are plenty of anecdotes and stories here to keep the most avid Spurs fan going.

Starting out in his youth in Belfast, the author follows the story through his war-time experiences, joining Glenavon and dreaming of following his idol, Peter Doherty to Maine Road. When he finally reaches England, the dark satanic mills of Barnsley don’t offer him much comfort and the fact that his football seems to be going nowhere prompts a move to Aston Villa.

While he feels that the weight of the past is weighing on the progress the club should be making, he tries to introduce new methods, much to the chagrin of manager and Directors, who regard him as a troublemaker.  It was with this tag that Tottenham bought him and their Directors were never entirely happy with his thoughtful approach to the game on and off the pitch. There are many instances where he was unhappy at White Hart Lane before he found a kindred spirit in Bill Nicholson to take the club to the greatest moments in their history.  Even then, he was not always a first choice and it is fascinating to fathom from the text here, how he fitted into the final pattern of the Double side. And when his time at Tottenham came to an end, there was little emotion in the decision as had happened to a number of faithful servants in his time at the club.

For all the tales of “the game being about glory”, it is interesting to note that when the situation required it, he was not opposed to using the resources available to him in any way that would achieve a result. When playing in the World Cup in 1958 in Sweden, this was particularly true, as the reports of the tournament included here show.  His captaincy and virtual management of the national side was a great honour for him, but again when the end came he wanted a swift end to it.

While a man whose thinking was way ahead of its time, his ideas still made others feel uneasy. Blanchflower’s battles to achieve what he thought should happen are detailed here and he upset a lot of people by wanting to get his own way. His attitude to those in command who knew little of football was one of scorn and his put downs of directors are very funny. Danny never really wanted to go into management, but was tempted and never scaled the heights he did as a player, but his journalistic career, which he started when a Villa player, continued with great insight and perceptiveness.

Blanchflower had a pivotal place in Tottenham’s history and this book fills in the information around that time and the paths that lead to and from White Hart Lane. One of the Spurs greats has been served well by this book.