The Boys From White Hart Lane 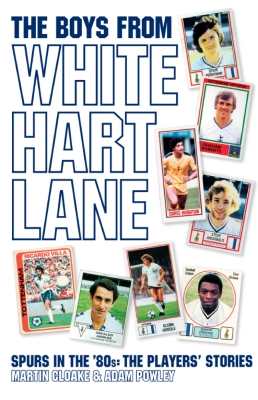 Spurs in the ’80s: The Players’ Stories
by Martin Cloake & Adam Powley

“The Boys From White Hart Lane” is a book that speaks to former Spurs players, who speak about the club from the heart.  Sometimes in frank language, but always with a love of the club which is what fans relate to.

Interviewing players who are stitched into the club’s history – Steve Perryman, Ossie Ardiles, Graham Roberts, Paul Miller, Ricky Villa, Tony Galvin and Tony Parks – there are also interesting contributions from those who wore the Lilywhite shirt – Garry Brooke and George Mazzon – that give an insight into the club with an eye from a different perspective.

The players speak of a different time to the money and fast cars of today’s footballers.  The 1970s and 1980s were a time when players lived for the game and their tales of team-mates and opponents add colour to the games many Tottenham fans will know of.  It is testament to the authors that the book has been edited to provide a highly readable recollection of the time.

Most interesting was the chapter by Peter Shreeve (mainly for the right spelling of his name).  His views of the club and the players who he had charge of are particularly engaging and the recollection of the death of Peter Southey – a talented young defender, who died of Leukaemia – is very touching, even after all these years.

Few books get players to give as candid a view of the club as this book; perhaps the first since Hunter Davies’ “The Glory Game.”

So, it a valuable insight into the running of the club and the playing for the club, with those involved providing an entertaining account of the club during a particular period of it’s history.