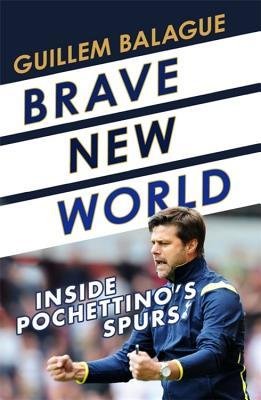 by Mauricio Pochettino with Guillame Balague

Mauricio Pochettino’s autobiography is a fascinating insight into the workings of his management of the team and of his thoughts on life and sport.  Told to Spanish football expert Guillem Balague over the course of the 2016-17 season, in a series of exclusive interviews, the book charts the highs and lows of what was a successful campaign, but highlights the worries and self-doubts that haunt managers through the ten months of football that makes up a Premier League year … and the remainder of the calendar year too.

The book is a fascinating insight into the approach Pochettino works and with the current “crisis” at the club, it is interesting to see how his philosophy will turn the malaise around.  A student of Marcelo Bielsa – the legendary Argentine coach – Poch is a believer in management by leadership and you get the feeling that if people aren’t on board, they are on the way out.  His handling of players might not be to everyone’s liking (meetings made public), but he is clear in his vision and how he wants to implement it.   This seems to have impressed Daniel Levy when hiring him and the two are close, meeting outside of work to discuss what is needed to make the club successful within the terms of the “project”.  Mauricio is aware of the restrictions on the club, with the way it is run and the methodology behind incoming transfers, so it will be interesting to see what the end result of the “project” will be.

The book details a remarkable similarity with his time in charge of Espanyol.  A member of staff dying having an emotional effect on the club.  The move to a new stadium.  All major upsetting factors in the season, but ones that are dealt with to maintain the progress the club is making.  His belief in youth was forged in Spain too and his relationship with John McDermott (Head of the Spurs Academy) lead to youngsters being blooded – a trait he had started at Southampton, becoming noted for developing and improving English players.  His view of how the game should be played and getting players to buy into that has taken many into the national team and onto better things.

Spain holds a prominent place for Pochettino and his family, so it would neither be a surprise if he returned there at some stage of his life nor if it was to manage, so the persistent rumours that have circulated for a long time linking him with the Real Madrid job won’t stop.  Specifically because he has said that he could not manage Barcelona after spending his early management career at rivals Espanyol.

Some of the thinking behind Pochettino’s approach is laid out in the book, with a great depth of study having gone into business leadership and motivation.  As a successful player in his time at Newells Old Boys and Paris Saint Germain, he is able to bring this mentality to the team and he can relate to the fears, ambitions and hopes of the players he manages.  The family feeling among the squad and his approachability means that he can manage those worries, whether they be things on or off the pitch.

Like “The Glory Game” more than 40 years before him, Pochettino allows unfettered access to a journalist he knows well (Ballugue is an Espanyol fan) and records the season’s progress in diary form, adding in his previous experiences and his loyalty and affection for his family.  It makes for a very interesting read by an honest and honourable man.