This article first appeared in MEHSTG in 1999.

Clive Allen joined Spurs from Queens Park Rangers in September 1984. His first two years at White Hart Lane were hardly spectacular for the son of Les Allen, inside-left in our Double-winning side of 1961, but the 1986-7 season saw Clive Allen hit a rich vein of goal-scoring form which lasted for the whole season.

It all started on the opening day at a less-than-full Villa Park. Only 24,712 (football was in a sorry state in those days – only one year on from Heysel, Millwall fans rioting at Luton and the fire at Valley Parade) saw Clive notch twice in the first half and complete his hat-trick after the interval as we comfortably won 3-0. Allen wasn’t the first player to score a Division One hat-trick in 1986-7, that honour went to Colin Clarke of Southampton, who finished his treble against Queens Park Rangers some ten minutes before Clive scored his third. Another goal followed two days later in-the 1-1 home draw against Newcastle and although Allen wasn’t on the score sheet in game three, Graham Roberts’ winner against Manchester City put us top of the league, albeit only briefly.

The pattern had been set, for the rest of the season Allen could do no wrong. By the time November ended, Clive had scored sixteen times in the league, all bar four of our Division One goals. The end of November was significant as it marked the debut of Manager David Pleat’s enterprising new formation, deploying a five man midfield with Allen on his own up front. It paid instant dividends on the day it was introduced, Spurs won 4-2 at Oxford with Allen and Chris Waddle sharing the goals. Our super striker was assisted by the number of games Spurs played that season. A 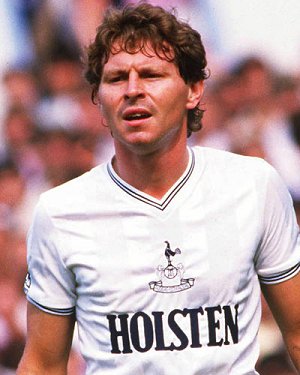 run to the Littlewoods Cup Semi Final added nine games to the fixture list, with six more coming virtue of the route to Wembley in the FA Cup. In addition, Clive stayed relatively injury-free. In the Cup competitions Allen scored sixteen times, including a late hat-trick against West Ham in a Littlewoods Cup replay which we eventually won 5-0, in fact, Clive scored in all our Littlewoods Cup ties, even the Barnsley home fixture when he was a substitute. Only defeat in a Semi-Final replay against Arsenal prevented Allen having a chance to score in every League Cup tie including Wembley.

Clive’s exploits were all very well, but a lack of goal-scoring support from his colleagues put paid to any race for the Title. The year ended with Clive bagging six more goals in the space of eight days, two each in the 2-0 win at Chelsea and 4-0 thrashing of West Ham on Boxing Day, with a third brace coming in the thrilling 3-4 defeat at Coventry. All consistent goal-scorers are supposed to go through a lean spell, but Allen didn’t, four games being his longest period without a goal during the whole season. The second half of the campaign was not as prolific: as the first had been, but there was another hat-trick, this time against Norwich City.

Tottenham finished the season in third position, Allen scoring 33 (including four penalties) of the club’s 68 league goals (our second highest scorer in the league was Nico Claesen with eight goals). Clive scored two hat-tricks and eight two goal hauls. With his sixteen goals in the Cup competitions, including one heavily deflected shot in the FA Cup Semi Final against Watford [which he wouldn’t be allowed to claim these days] and one in the opening minutes of the FA Cup Final against Coventry, Clive Allen ended the season with a remarkable total of 49 goals, a new individual scoring record for Spurs, including both League and Cup.

His tally of 33 league goals was four short of Jimmy Greaves record of thirty seven scored during the 1962-3 season. Allen’s fantastic season saw him earn a recall to the full England side and win “Player of the Year” from both the Professional Footballers Association and the Football Writers Association. The following season all eyes were on Allen to see if he could keep up the goal-scoring feats. As it turned out, 1986-7 was a one-off for Allen, a year when it all went right, as he only managed a somewhat poorer return of only eleven league goals in over thirty Division One appearances during the 1987-8 campaign.

Out of contract at the end of that season, Clive Allen ended his four year spell at Spurs and moved to Bordeaux in France. Twelve years on and his goal-scoring record still stands. It will truly be a remarkable achievement if anyone ever manages to beat it.