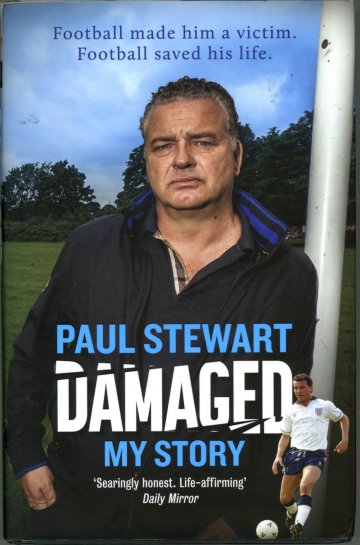 by Paul Allen with Jeremy Armstrong

This is not an easy read.

Paul Stewart’s harrowing story of being abused by a paedophile coach during his teens indicates just how manipulative such despicable people operate, terrifying their victims into not revealing what they were going through and getting away with it for years.

Stewart is a footballer was better known as the scorer of a FA Cup final goal, an England international and one of the few players to feature in a Spurs v Arsenal, Liverpool v Everton, Newcastle v Sunderland and Manchester City v Manchester United derbies.  Then, in November 2016, all that changed when the news broke of the wide-ranging exploitation of young players by their coaches and Paul Stewart was incredibly brave to come out and tell his story in the Daily Mirror.

The journalist he revealed what had happened to him was Jeremy Armstrong and he is the empathetic story teller here.

Not having suffered the horrors that Paul was put through when he was a football mad youngster, it is gut-wrenching to hear how the perpetrator of the abuse manipulated situations to win over the trust of those around Stewart, but also to ensure that he wasn’t found out.  How many others suffered at his hands may never be known and he never faced justice, as he died before the scandal broke.

For the former Blackpool, Manchester City, Spurs and Liverpool player, it must have been a living nightmare and his admission that he didn’t speak for nearly a year indicates the deep-lying impact that the experiences had on him.  To achieve what he did in the game is testament to his single-mindedness to succeed despite what he had been through.  Not that his career was without problems, as his decline into drink and drugs to make life bearable threatened his career and most devastatingly his marriage.  His family have been a great support to him following his revelations and life is now much better for Stewart.

The book is a moving and shocking tale in equal measures.  The reason Paul wrote the book was to help others who have suffered in the same way and to give them hope that they can break free of the grip of the memories of their own abuse.  The frank stories are mixed with some funny ones too, so, it’s not all downbeat and it does have a happy ending.

After reading it, you are left with an admiration for the player who represented our club with such distinction and with a hope that life will treat him well from now on.