The Day My Dream Ended  –  Jimmy Holmes The Autobiography 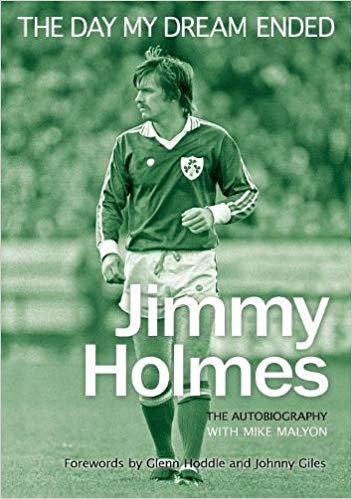 Probably only a small percentage of a Tottenham Hotspur Stadium crowd might remember the name of Jimmy Holmes.  A Republic of Ireland international, Jimmy joined Spurs from Coventry City in 1977 and was a classy defender, who could also play midfield, but whom possessed the intelligence to pass the ball out from the back.

This book charts his career that was cruelly ended by a late tackle in Bulgaria while playing for his country and the treatment he received in the local Sofia hospital led to it being curtailed sooner than it should have been.  Jimmy had worked his way up from playing with local sides in his native Dublin, through turning down Manchester United to join Coventry City and on to starring for Spurs in a short, but effective time.  Coming to Tottenham at what wasn’t the best time, he was in the side that saw Spurs relegated to Division Two, but bounce back at the first attempt (just).

Holmes could have been part of a talented Spurs side that went on to win the FA Cup twice and the UEFA Cup in the early 1980s.  The shocking effect of a plaster applied too tightly to his broken leg meant that after that he rarely featured for Tottenham again, leading to along period of recovery, a spell in the NASL playing for Vancouver Whitecaps, a couple of games with Leicester, four for Brentford and then longer stays at Torquay United and Peterborough.  Slipping down into non-league, his playing days ended with a transition to player-management, which he found difficult.

Disillusioned with the attitude of some players, court action over club finances in the background and frustrated with not being able to play any longer, Jimmy struggled being out of the game that had dominated his life since a young boy.  The couple’s eldest son suffered with Cerebral Palsy with them spending a great deal of his time spent helping him through the early years, but his marriage suffered (mainly through a drink problem in the latter years of his time in football) and he joined the Police, where he excelled showing great bravery in one incident and received an unexpected footballing call-up in another.

While the writing in the book is almost like a verbal transcript of a long interview and isn’t the longest story in football, Jimmy Holmes appears to have suffered a fair bit more than many of today’s top players and has come through it by adapting both in his career in the game and out of it.

A decent read and it is written in a readable style, giving a real feel for how a player copes when there are more lows than highs.