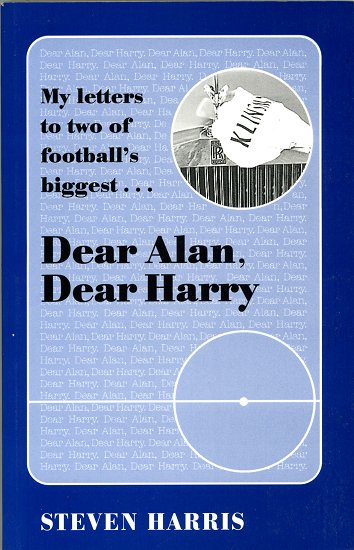 Letter writing is becoming a bit of a lost art. With the use of e-mail becoming commonplace and the language that has grown up around it, letters are quickly becoming a thing of the past. But not before Steven Harris had the chance to post off his missives to Messrs. Sugar and Harris of the title of his book.

Cheesed off with the way the club was conducting itself and the direction it was heading in, Steven was keen to get some answers to the questions in his mind, so he went to the men in the know (or so he thought). His persistence in penning letters to those in positions of authority and those who may have the information to lay his mind at rest is dogged. Even in the face of some frankly blunt and rude responses from the club and journalist, he soldiered on to try and find out why things were happening to his club and why certain reports were appearing in the Daily Mirror. Harry Harris even tried to ban the book from Sportspages bookshop and was threatening to sue for defamation, so Steven must have been doing something right !

Steven asks the questions that have popped into all our thoughts over the last three years. In one way he is as much a thorn in the side of the hierarchy at the club as Mark Jacob and although going about it in a different way, has received much the same treatment. He doesn’t just limit himself to those two people in the title of the book and it is to his credit that he has kept a level head in replying to some of the comments he received from his targets.

A very interesting read and although not all the queries are resolved, the attitude and thinking of the men behind the replies is revealing.