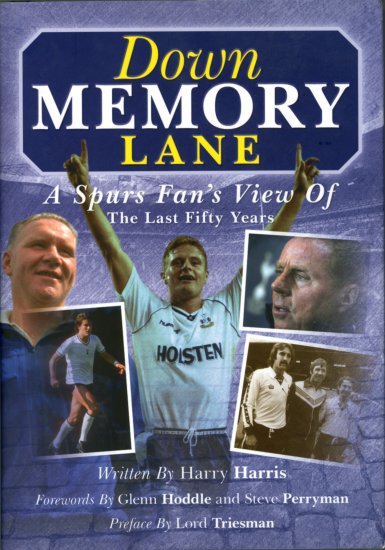 Harry Harris started his early career on the Tottenham Journal and being a Spurs fan this was the ideal job for him.  However, as his career went onwards and upwards, he moved on to Newcastle, then the Daily Mirror and the Daily Mail.

Along the way, Harry has encountered and befriended a number of key movers and shakers in the recent history of Tottenham Hotspur and the game of football in general.  And never one to pick up a name dropped, this volume of Harry’s memoirs of watching Spurs over 50 years is littered with the famous and infamous as they pass through his life.

Although it is perhaps a journalist’s mantra of never letting the facts get in the way of a good story that make these memoirs a little faulty.  Now anyone who has been supporting Spurs for any length of time would need to be some kind of memory man to recall every detail of every game, but research is not hard these days in the time of the Internet, so saying Ardiles was sacked after a defeat at Notts. County in the FA Cup means it was a particularly odd fixture arrangement, with the game taking place mid-week and in October.

But, notwithstanding the fact that facts are incorrect and with the book aimed at Tottenham fans, these will rankle, it is a readable book that fills in some of the background in the major events which have affected White Hart Lane over the last five decades.  While Harry has his favourites and some who he would not call close friends, he has obviously been involved in places which normal Spurs fans could never be.  Some of the reminiscences are a little self-important, that is Harris’ forte and there are things that happened which I for one did not know occurred and it may be questioned as to whether they have ever been made public before.

Having moved away from the heady days of a young sports reporter on the Tottenham Herald, some of his views on the game tend to be seen through jaundiced and weary eyes.

There are passages which will tug at the heart strings of THFC supporters and some which get you fuming, but the book is written to be easily digested, although the chronology of the book jumps about a bit and leaves the reader a little like the main subject in “The Exorcist” with your head spinning.

I found the earlier parts of Harris’ career the most enthralling, coming at a time when Spurs were struggling and his relationship with Bill Nick was not always straightforward, but gives a picture of the man and some of his players, including the recently deceased Jimmy Neighbour.

Sometimes frustrating, sometimes riveting, this book will fill in some of the gaps from someone who was “in the know”.