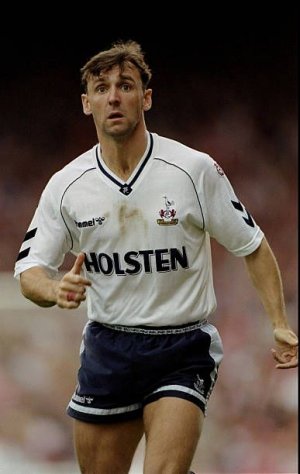 Another member of the Allen family, including Les and Clive, who represented Spurs with such distinction and his Dad also played football for the Army and his uncle Peter was on Charlton’s books, before he dropped out of the game.

While Paul often found fans not willing to acknowledge his contribution to the side, it is perhaps not surprising, as he went about his work in the engine room of the midfield without any fuss and regularly was responsible for creating goals if not scoring them too.

Paul attended Aveley Comprehensive school and played for Thurrock and Essex Boys representative sides.  He was spotted by West Ham and signed apprentice forms with the club in the summer of 1978.

With his family background of Uncle Les and cousin Clive having established Spurs credentials as it was, even when he signed up for West Ham United after progressing through their youth ranks, it was perhaps inevitable that he would end up at White Hart Lane at some point in his career.  His industrious midfield work brought him an FA Cup appearance at the age of 17 when the Irons beat Arsenal in 1980 and having moved through the England Youth team to the Under-21s, his star was in the ascendancy.

Having been a regular in the West Ham team from the age of 18, when his contract was up for renewal in the summer of 1985, he was being courted by Arsenal, Liverpool and Tottenham.  He chose to team up with Clive at the Lane in a side which had just added Chris Waddle to the side too.

His typical attitude to the game was to give everything he had and while he was not a flashy player, his contributions were pivotal in the development of an entertaining team which developed under David Pleat and then Terry Venables.  His work on the right wing backed up Waddle’s forays and provided some defensive cover there, but while he didn’t score a huge amount of goals, he did pop up with important ones when they were required.

Was part of the side that lost to Coventry City in the 1987 FA Cup Final, but was back with Spurs in 1991, when he made Paul Stewart’s equaliser and was a vital part of the team that went on to win the Cup.  In a side with mercurial talents such as Paul Gascoigne and Gary Lineker, Allen’s part was often over-looked, but a review of the FA Cup semi-final win at Wembley over Arsenal that season typified his approach to the game and his steely will to win.

Having played at Youth and Under-12 and Under-23 level, Paul never had the call for the senior side, but almost broke into the B squad, when called up at the end of the 1988-89 season.  However, injury prevented him from joining the squad on the trip.

With a good few years behind him in the first team, it was a surprise when Ossie Ardiles took over and opted to do without his service and with little opportunity available to him, Paul moved on to Southampton in September 1993.  Following a spell at the Dell, he moved onto other clubs, but never had the success he did at Tottenham.  Nor did he probably get the support of fans who appreciated his true worth to the team.

Other articles on Paul Allen …

By The Midfield General
By –