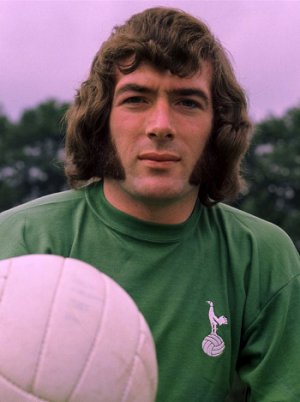 A legendary goalkeeper for club and country, Pat Jennings was a hugely likeable man and that perhaps bridged the awkwardness that might have been caused by him leaving Spurs to join Arsenal.

Jennings started playing football in the streets in Newry aged five or playing it on the only pitch available on a local recreation ground, as there were no football leagues, only organised Gaelic football leagues.  Pat attended The Christian Brothers and St. Josephs schools in Newry and started his footballing career with his local team Newry Town. He also played midfield for County Down at Gaelic football (representing North Downs Schools) and enjoyed basketball at school, but this was not a problem for Pat, as both sports honed his handling skills.  Playing in an under-18 street football league team at the age of 11, he went on to earn a place in Newry Town’s team and after leaving school in Newry, he worked as a tree-feller.

The keeper had played half a season with Newry Town before he was selected for Northern Ireland Youth team, in an international tournament in Bognor Regis in 1966.  And it was there that he was spotted playing for his country, who reached the final – losing 0-4 to England – and although Coventry City were interested, Jennings signed for Watford – having been spotted by former Spurs captain Ron Burgess, then the Hornets’ manager.  Other sources report that Bill McCracken, the former Newcastle defender, was the man who recommended Pat Jennings to Watford having seen him play in the competition.  Pat played his part in the last two games of the season after the Hornets secured their place in the old Third Division and then was ever-present the following season as the team missed out on promotion by just one point.

Bill Nicholson was looking for a replacement for Bill Brown and watched Northern Ireland with Watford manager Bill McGarry, who persuaded the Tottenham boss to sign Jennings.  The Irishman signed for Spurs from Watford after playing just 48 games for the Hornets.  Spurs beat Sheffield United 2-0 on his debut at WHL against Sheffield United, but the following month lost 1-4 to Manchester United for which Jennings received a lot of flak for his performance.  Then, just two days later against Blackpool, he played brilliantly in a 1-1 draw.

Pat’s development at Spurs perhaps came quicker than he might have imagined, but his size, confidence in dealing with the physical side of the game (honed in Gaelic football) and his magnificently large hands aiding his catching ability made him a formidable man for forwards to try and beat.  Used to playing a different game to association football, Jennings used any part of his body to keep the ball out and Spurs were grateful for his presence on many an occasion.

But it was not only keeping them out that Pat could achieve.  He scored for Spurs in the 1967 FA Charity Shield match against Manchester United at Old Trafford when he kicked the ball out from his hands and it bounced over Alex Stepney at the other end of the pitch into the goal !

In 1973, Pat was selected in goal for The Three as they faced the Six in a game to celebrate joining the European Common Market.  It took place at Wembley on 3rd January 1973 with players chosen from Denmark, the Republic of Ireland and the UK pitted against a selection from Belgium, France, West Germany, Italy and Luxembourg, which ended in a 2-0 win for the Three.

When the UEFA Cup final of 1974 was lost to Feyenoord, it was virtually the end of Bill Nicholson’s reign at the club and the team he put together was breaking up.

Jennings’ ability in goal was equal to what George Best could do with a ball at his feet, but for both stars, playing for Northern Ireland was always going to be second best to what club football could offer.  Pat regarded it as a great privilege to wear the Northern Ireland shirt, but his early success came with Spurs as they took the 1967 FA Cup with a win over Chelsea, then two League Cups in the early 1970s, sandwiching a UEFA Cup win against Wolves in 1972.  However, unlike Best, he did get to play at the World Cup finals in what must have been a dream come true, especially in 1982, when they beat Spain on their own soil.

Having broken the Tottenham appearance record in August 1975, Jennings received MBE in the Queen’s Birthday Honours List of the Summer of 1976 for services to football, but when Spurs were relegated from the top flight in 1977, the management looked at the squad and did not want Pat to play in the Second Division, feeling that he was coming to the end of his career and having Barry Daines in reserve to cover his position, so agreed to sell him, but when he joined Arsenal for a paltry sum, many Tottenham supporters were outraged.  Not with Pat, but with the Board.

Pat Jennings played three times at the World Cup finals and all were as a Spurs player.  After 20 years of playing in the competition, with his first appearance was in a qualifier against Switzerland, he finally got onto the big world stage in Spain in 1982 and then again in Mexico four years later.  When he took his place between the sticks in Ireland’s opening game against Algeria in 1986, he became the oldest player to take part in the finals at that time at the age of 40.  The match ended in a draw, but their next match, against Spain in Guadalaraja, saw them lose 1-2 before Pat was in goal again for the final group game – a 0-3 defeat by Brazil – on the day he was 41.  While a disappointing end to a glittering career, it marked Jennings’ 119th cap, which was another world record at the time.

At Arsenal, he played in three FA Cup finals, winning one and losing two.  Halfway through the 1984-1985 season, Big Pat had been replaced in goal and looked set to retire at the end of the season, but when Spurs offered him a return to the Lane to maintain his fitness for the 1986 World Cup Finals, he jumped at the chance.  Although re-signed by Tottenham and having played in a ScreenSports Super Cup tie in April 1986, Spurs agreed to cancel his registration so that he could sign on loan for Everton and provide cover for reserve keeper Bobby Mimms and injured first choice Neville Southall, with a FA Cup semi-final approaching.

Pat returned to Spurs in 1993 at the behest of Ossie Ardiles to take up a position as a goalkeeping coach and worked part-time helping out with the goalkeepers at the club for a further 20 years.

Pat and his wife Eleanor (a former singer) also have three daughters – Siobhan, Ciara and Mairead – and one son – Patrick junior, who was also a goalkeeper, was with Spurs and Wimbledon as a youngster, going on to play professionally with UCD and Derry City (with whom he won the Eircom Cup), Sligo Rovers, Shamrock Rovers and Glenavon in the Irish Eircom League.

* Includes one match which was abandoned

Represented The Rest of the UK, All-Star Ireland XI and The Three against The Six (European Common Market match)  3rd January 1973.

Other articles on Pat Jennings …

“An Autobiography” by Pat Jennings in association with Reg Drury.
.