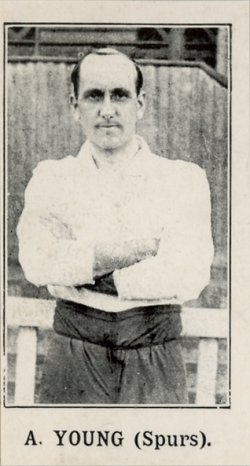 A football career that hit the heights descended into turmoil once Alexander “Sandy” Young completed his playing days.

St. Mirren and Falkirk were Sandy’s early clubs in Scotland, before he joined Everton in 1901 and he enjoyed a ten year stay at Goodison Park.  The physical centre-forward hit the net 125 times in 314 first team games for the Toffees with one of them being the winning goal in the 1906 FA Cup Final.  Much loved by the Goodison Park crowd and noted for his determination, spreading of play to the wings and dribbling, there were outcries when he left in the summer of 1911.  Sandy joined Tottenham and started impressively, scoring three goals in the first two league matches (including an opening day goal in a 2-2 draw against his old club Everton), but when he couldn’t carry that on in the next two matches, he was left out of the side. This was something he didn’t take well and he demanded a transfer.  Therefore, Spurs allowed him to sign for Manchester City in November of the same year.  His career started to tail off, being released by City in 1912, then spending only a year at each of South Liverpool and Burslem Port Vale.

At the end of his football career, Sandy emigrated to Australia in 1914, where he had a dairy farm with his brother John.  The brothers violently disagreed on how the money Alexander had poured into the farm should be repaid and following one final argument, Sandy was found to have murdered his brother by shooting him dead.  The charge was later reduced to manslaughter and Young served three years in prison (see below), before returning to Scotland.

Other articles on Alexander Young …