For all the cries of Tottenham being a stylish, entertaining team with our heroes personified by the likes of Blanchflower, Hoddle, Waddle and Gascoigne, there are other members of the team who do not catch the eye as much, but perform as important a function. Yes, there are players who do the legwork to allow others to play and are the unsung heroes of the Tottenham sides down the years. One such player who deserves greater praise is Tony Galvin.

No-one would have called Tony the most stylish of players. His flapping shirt and socks rolled short down to his ankles made sure of that, but he was a real stalwart of the side during the Eighties, when Tottenham had a purple patch with trophies coming to White Hart Lane on a regular basis. Indeed, as we will see, without him, Tottenham’s history could have been very different.

It might have been the case that the winger would never had made it to Tottenham, because of the weather !! Tony had been playing for Goole Town in the Northern Premier League, when Bill Nicholson (who had returned to the club to help with scouting after he had disgracefully been allowed to leave and go to West Ham) was tipped off about his growing reputation. Bill set off with his wife on the long journey to Buxton, where Galvin would be playing for Goole. However, the further North Bill got, the worse the weather turned – from rain to sleet and snow. They thought about turning back as they encountered floods and the threat that the game would most likely be called off anyway. However, arriving at the ground, Mr. Nicholson found a covering of snow on the pitch and to his surprise, the game was played. The Spurs legend enjoyed what he saw of the strong running youngster and recommended to Keith Burkinshaw that Tottenham stump up £30,000 for his transfer. And so, Tony Galvin became Bill Nicholson’s first discovery. 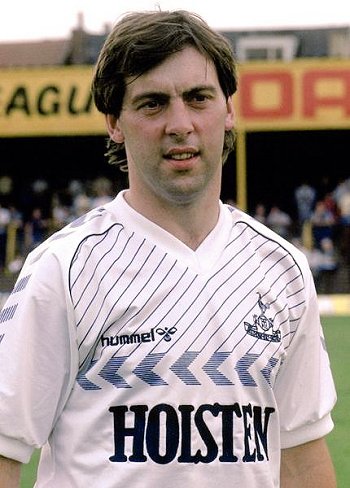 That was 1978 and Galvin had to wait until February 1979 for his debut, when he made his first start for Spurs at home to Manchester City in a 0-3 defeat. Not an auspicious beginning, but a breakthrough to the first team nonetheless. His first goal came in an away game at Derby, but Tony was not selected to be in the starting eleven for Spurs again until the April of 1980, when he was on the scoresheet in a 2-1 win at Molineux against Wolves. It was a frustrating period for him, as he missed the majority of 1980 through injury and although he had a run of matches towards the end of the 1979-80 season, he only made the number nine shirt his own around the start of 1981.

He was always a fit player, but he often took knocks as he went down the wing. These took their toll on him in the long term. But the sight of him flying down the wing was one to behold. When he first came into the side, he often used to go so fast that he would run out of room on the pitch and take the ball over the goal-line. His strength was an asset that many more trickier wingers lacked and it was very hard to knock Galvin off the ball. But his strength did not belie his ability to cross accurately from the wing to set up chances for his forwards, from Chris Jones through Archibald and Crooks to Clive Allen, to put away. Unlike many Spurs wingers before and after, his crosses invariably were into the danger area for forwards to attack and that they did.

Finding himself established in the team at the time he did, came at the start of a very good era for Tottenham. With a nucleus of players who had played together for a couple of seasons – Ardiles, Villa, Hoddle, Hughton – along with the new signings from non-League making a name for themselves – Galvin and Roberts, the team had experience and raw enthusiasm. It was a potent mix that saw Tottenham make Wembley their second home for the first few years of the decade.

Of course, the first step towards this was the winning of the 1981 FA Cup. Not a classic Final, but the replay was one not to be forgotten. Tony played his part in scoring the goal that put Tottenham on their way in the Third Round replay at home to QPR and also in the final itself. It was Galvin, after all, who ran down the line, then gave the ball to Ricky Villa for his spectacular goal against Manchester City that is one of the goals of all-time.

Following this came returns to Wembley for two Charity Shield appearances, another two in the 1982 FA Cup Final and the Milk Cup Final against Liverpool in 1982. The 1981-82 season was when Tottenham were attacking on four fronts. An assault on the League title was lost when we lost to Manchester United in April and then slipped away at the end of the season to finish fourth. The FA Cup was the one trophy that did come out of that season, but only after two dreadful matches against QPR in the Final. Back in Europe, Spurs progressed to the semi-finals of the European Cup Winners Cup to meet Barcelona. It was in the home leg that Spurs took a good kicking as the Spanish side cynically set out to stop us at all costs and did so by whatever means came to hand (or foot or elbow or …). However, what is forgotten amongst all the lost opportunities in the defeat in the Milk Cup final to Liverpool, in extra time, is the nature of their approach to the match.

Going back to the semi-final, Tony Galvin had been sent off at the Hawthorns with WBA’s Martin Jol for getting thumped around the ear. The referee, obviously wanting to leave the West Midlands alive, made sure he was even handed about things and Galvin got the red card to even things up – just for being there !! Come the final, Tony was playing very well and it is obvious that Liverpool had marked him out as the Tottenham danger man. That is why he was “hit” with an early and painful tackle by Graeme Souness. Now there was never any love lost between the Scottish “hard-man” and Tottenham, since he left as a teenager, but this was very nasty. Galvin was a virtual passenger for most of the match and with that tackle went Tottenham’s chance of victory. 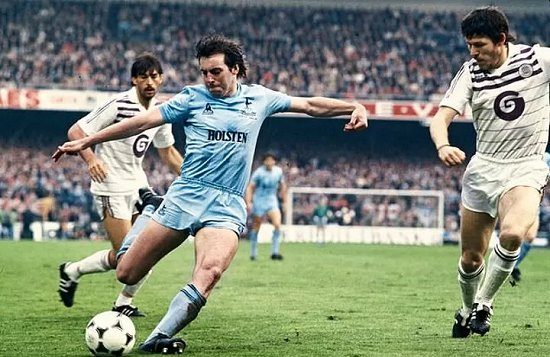 After that, Galvin was to play a crucial part in the Spurs team that went on to win the UEFA Cup in 1984 by overcoming Anderlecht on penalties in the Final, to finish off his haul of medals won with Tottenham. But, for me, it was his performances against Johan Cruyff’s Feyenoord in the Third Round that stood out. Two goals in the marvellous home leg (one of the best ever Spurs performances) and one in the away, really tied up the tie for Spurs. His calm finishing was that of an ace goal-scorer and not one of a winger who just happened to score.

He was not just successful at Tottenham, but also won 19 caps for the Republic of Ireland, scoring once. He was never prolific in the scoring department, but in his 273 games for Spurs, he got 31 goals, which wasn’t a bad return for a wide man. He even got a hat-trick against Southampton at home in May 1986, which had a bit of everything.

He was sold in 1987 to Sheffield Wednesday by David Pleat, as the old guard was moved on. Again hit by injury, he never really played like he had at Spurs and moved to finish his career at Swindon Town. An Assistant Manager position there and subsequently at Newcastle looked like leading to a future in the hot seat, but it wasn’t to be. After being dismissed with Ossie at St. James’ Park he slipped out of the game. Tony was one of the few players who had an education behind him, with a degree in Russian Studies, which he now puts to good use teaching at a London College. There are still quite a few things players of today could learn from him too !!