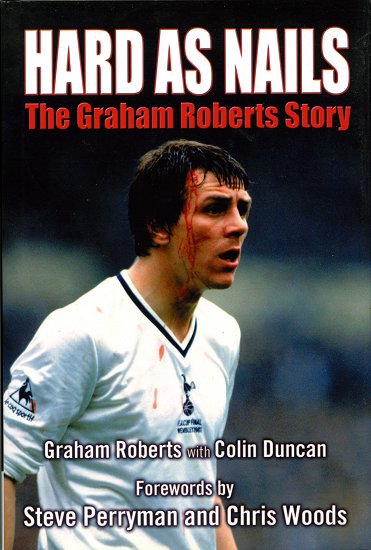 by Graham Roberts with Colin Duncan

A cult hero during his time at Tottenham, Graham Roberts was a no nonsense defender/midfielder, who always gave to 100% and was an honest and rugged player.  His autobiography is not a lot different, with a bit of a “warts and all” tale of tale of hard men and sly operators.

Amongst the things revealed in the story are revealing, touching and in some cases quite extraordinary.  But, you get the feeling that somewhere Graham Roberts has a Jack Charlton style ”little black book” of names he would like to get revenge on.  The players, managers and chairmen who had upset Robbo through the years are brave men, as I wouldn’t want to be in their shoes if they came face to face with him again.  The book is more littered with fallings-out than the High Road after a Spurs game.

But there are two real sides to this story, with Glasgow Rangers being the other half; so much so that you can turn the dust jacket round to have Roberts in a Spurs shirt or in a Glasgow Rangers shirt.  Yes, there are reminiscences about his time at Chelsea, West Bromwich Albion and into non-league, but there are falling outs with names big and small.  From his time working at the dockyards at Southampton through to his fight to clear his name following incidents arising on a tour of Canada with Clyde, Robbo fights his corner in the only way he knows.  With everything he has got.  It has cost him a lot along the way, but he still wants to show the world that he is worthy of being given a chance.

The book is written in a forth-right tone, with a cliché or two too many thrown in, but there are many revealing passages such as why Micky Hazard never won a cap for England and why Roberts fell out with Ossie Ardiles.  Graham also tells of an environment which is harsh, especially in the early days of his career, but it is also a world where good fortune can lead to a fortune for players who make it to the top.  Extending this to the n-th degree, there was even open trials when he was manager at Clyde to bring new players into the club !!

Interestingly enough, his comments about former Spurs and Chelsea striker Kerry Dixon always wanting to have a fight with Richard Gough ended with a thought that maybe Dixon would get involved in a charity boxing match and this is exactly what happened back in May this year (where David Speedie was taken to hospital with broken ribs following a bout with Steve Sedgley).  But there is a lot in the book about Spurs, Roberts’ time with the club and the way he left.  Plus the rest of the book has interest in a general football sense, but it is the opening half that brings the backroom view of Tottenham Hotspur FC into the reader’s world.

It is something that we will never experience, but this is the closest we might get.