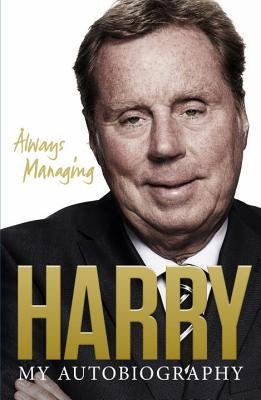 by Harry Redknapp with Martin Lipton

Where would you expect this tale of Harry Redknapp’s life to start ?  On the training ground ?  Watching a prospective target on a wet, windy night at Aldershot ?  At the races at Newmarket ?  Arguing his case in the boardroom ?  Well, you would be wrong.  It begins in Southwark Crown Court.

His long, drawn out trial for financial irregularities take centre stage and while his fears about what might happen to him if he were to be found guilty are a little extreme, it was obviously a defining moment in his life and ended up preceding the end of his time at Spurs, after he appeared to be set on taking the vacant England job that cropped up just after he was found Not Guilty.

At his trial, he said, “I have a big problem, I can’t write so I don’t keep anything.”  Well, perhaps it is just as well he had Spurs fan and leading newspaper football writer Martin Lipton to put his words down on paper for him, although some more astute editing might have made some of his anecdotes briefer.  And having been in the game for 60 years, Harry has loads of stories.  Some have been heard before, some not, so there are a few gems in there, but at 411 pages, it is a big book !

His frankness is not a surprise, as he is happy to call an expletive and expletive and there are some interesting relationships that he has developed over the length of his time in football.  Some good, some bad, but it is his time in charge at Tottenham that would take precedence for most Spurs fans.  Returning to the club that he watched from the terraces as a boy and where he almost got took on by Sir Bill, his arrival at the Lane had a couple of false starts and it doesn’t take long to trot out the “two points from eight games” mantra.

And that is the sticking point in the book for me.  You know what you are going to get to a certain degree. The bog standard “players these days” sections and passages about the hard-drinking, hard-playing footballers of the 1960s.  The only disappointing thing is that I can’t remember him mentioning being “down to the bare bones” anywhere in the book.  But he makes up for it elsewhere.  Tracing the career of the manager from Oxford City through to his time at Queens Park Rangers, the book sees him at odds with owners, referees, players … even fans, who for once (according to the bulk of his book) on one occasion – proved him wrong by jumping out the crowd (at Harry’s request) to score a goal.

The book reads easily and you can almost put Redknapp’s voice to the words as they are read, but what is missing from the book and the subconscious soundtrack, is the subtext, which you have to fill in for yourself.  He might have things recorded in this book, but your mind is often telling you something different, as you read into it what you want.  It is not something that you would accept as gospel.

Harry doesn’t play the victim, but more often than not, he appears to be one and while that line of writing becomes a little tiresome, the book is a decent read … if only to find out how he feels about supporting teams and facing them in his professional career !