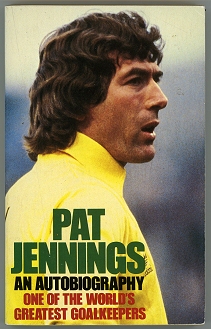 The legendary Spurs keeper put together his thoughts as he thought he was coming to the end of his playing career.  Little did he now then that it was not the end of his story.

So, this particular book covers his time from birth to just before he left Arsenal with internationals, club games and his views on players and the game in general all covered.  And for someone who is softly spoken, his words sometimes surprise in his strength of opinion on certain matters and players.  I do not imagine that Mick Jones, the former Leeds United forward, is on the Jennings Christmas card list (despite Pat’s “after game the game was over I held no grudge” comment).

It is an interesting read when you hear how Pat coped when he was injured – not that he was injured often, but the one in the 1982 FA Cup tie at the Lane when he had to leave the field when playing for Arsenal, almost cost him his World Cup place and his career.  He tells of his understudies, but has little sympathy for them, as his place in the team is the more important thing.

His early life was dominated by sport, with Gaelic football leading to him playing in the street for “Shamrock Rovers”, before being spotted and taken to Watford under the management of former Spurs man Ron Burgess.  From there to Tottenham and success and developing into ‘One of the World’s Greatest Goalkeepers’ as the sub-title of the book runs.

Jennings’ departure from Spurs is covered here and would perhaps come as no surprise in the way the club went about it reading it now, but back then, the chasm between players and the board is laid bare in Pat’s recollections of the matter.  His views on fellow Spurs players are a good read and not all are what you might think, with unexpected revelations about some of the team-mates he shared a dressing room with.

There are large tracts of the book which cover his time at Arsenal, but the book contains plenty of Spurs related tales of European football and getting out of countries on foreign tours; winning cups and suffering big defeats; other goalkeepers; good and bad grounds; making saves, goals he let in and one he scored and having no fear to cover topics as wide ranging as high wages (when most players were on £80 a week), a united Ireland team, hooliganism, referees and the future of the game (which would feature a Super League, ground-sharing and the death of reserve team football).

Looking back, it is a snapshot of the times and those that went before.  Pat saw a lot of changes in the game and there were a lot more to come, but one thing didn’t change … and that was the fact that Pat Jennings was definitely ‘One of the World’s Greatest Goalkeepers’.