Losing My Spurs : Gazza, the Grief and The Glory; Memoirs of a Failed Footballer 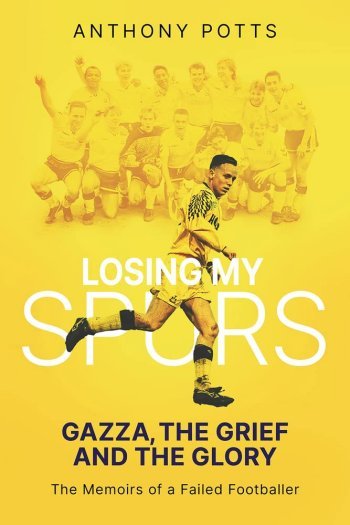 Paul Stewart is responsible for former Spurs Youth and Reserve striker Anthony Potts putting his experience as a footballer whose dream didn’t come true down on paper.  Stewart told him that he should write a book about all the escapades that Paul Gascoigne got up to, but this publication is much more than that.

Potts tells his story of how he wanted to be a professional footballer for Arsenal from a very young age through to the moment he realised that he wasn’t going to make it.  Some of the early detail is a little tedious when he recounts what life was like when he was young, but it is scene setting, so lays out the background to how he developed through playing in the park to trials to signing as a Youth Training Scheme apprentice.

Once at the club, he loves the atmosphere around training and playing, but the peer pressure and competition for places is ruthless and his description of some of the coaches’ methods and how players are treated when the club no longer rates them before they are discarded is a little shocking in this age of mental health considerations.  Having been part of the 1990 FA Youth Cup winning team, Potts was aiming for a place in the first team over the next few years, but as is the case for many youth players at the club, they suffer from injuries and being pushed back down the pecking order by new and bigger signings.

A contemporary of Ian Walker, Sol Campbell and Jamie Redknapp, ‘Pottsy’ recounts stories of others who made the odd first team appearance before vanishing into obscurity, with some that are tragic.  The toll taken on players during and after their time is told with brutal honesty.  His time at Tottenham turns him into a Spurs fan, but he gets great joy when he returns to the Mill Hill training ground with Dagenham and Redbridge for a pre-season friendly after being released.

There are harsh recollections of what happened to him after leaving Spurs, when he admits to making wrong decisions that didn’t help his future as a footballer, but then other decisions about how his dream was ended were made a long time before he reached that point at the age of 23, when he started a different type of training … to be a teacher.  He also written a couple of novels, so a book like this did have the groundwork laid for it.  Fortunately, because of his family and people around him, it appears that he has come out of his experience as a rounded individual, but his previous football career still haunts him a little.

This book is an easy read if not one that contains some unpleasant episodes, as some of the tales in it are harsh and shocking, but Anthony tells his story with a collection of funny anecdotes (quite a few involving Gazza) in there and it is an intriguing insight to what a lot of young kids dream of, but how it can turn into a nightmare in reality – both physically and mentally – for most of those who don’t make the grade.

While Potts may not be a household name among even Spurs fans, he has played and worked alongside a lot of such players and his tales of a Tottenham trainee certainly bring a dose of reality to those of us who haven’t seen the other side of what happens to the ones that clubs don’t see progressing to the first team.