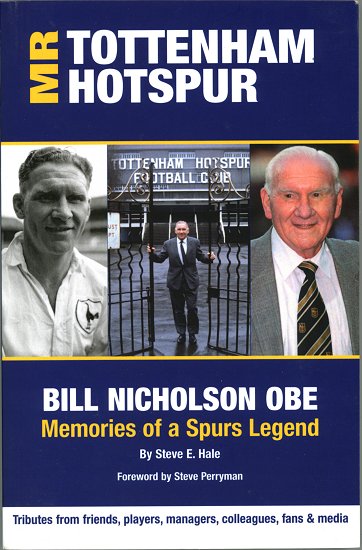 One might be forgiven for thinking that writing a book reminding Spurs fans of just how great Sir Bill was can’t be that difficult.  But such a thought would do a great disservice to this book which has been expertly crafted to chart the 70 years since Sir Bill first walked through the gates at White Hart Lane until his death last October.

At 230 pages the book moves swiftly through Bill’s life in four parts 1930-1960, 1961-1974, 1974 onwards and events after his death and manages to inject the right level of humour into the text to provide a balanced reflection of Bill and lay rest to the myth that he was just a dour so-and-so.

All the crucial games through the double period and in Europe are mentioned but only with a couple of sentences on each.  This book is about Sir Bill and other texts have already done an admiral job recording the exact detail of every game.

This book succeeds because the author Steve Hale has interwoven anecdotes and recollections from players, supporters and officials with fact and thereby given them a chronological setting.  The book provides a real sense of how the club and football in general was changing throughout the 50’s, 60’s and 70’s and perhaps the saddest part is not Bill’s death but the events immediately before and after his resignation in 1974.

Extracts from Irving Scholar’s autobiography add a controversial note with recollections that Keith Burkinshaw did not get on well with Bill and was highly critical of his scouting methods. Scholar suggests that David Pleat alone among all the managers through the 80’s and early 90’s appreciated Bill’s involvement and that …”managers were always trying to pull Bill down. They knew they could not hope to match his Double achievement or to supplant him in the minds of Spurs fans.  They would often niggle and moan about what Bill did.”  We will never know how true this was,but by also including an extract from Keith Burkinshaw’s book the author does at least attempt to disprove the claim and demonstrate Keith’s admiration of his predecessor. I am sure I would not be alone in thinking much less of our former managers if such narrow-mindedness had been demonstrated.

This book unashamedly tugs at your emotions. There are the ‘hairs on the back of the neck’ moments in recounting the cup victories that we all witnessed.    There are the throat clogging moments when you read comments from Bill’s close family and there are genuinely tear jerking moments when you appreciate what we, football in general, Spurs and most importantly Bill’s family have so recently lost.

Two quotes stand out among so many worthy recollections in the book. The first is from South London Spur who says of Bill. “He turned a crumbling, poor but bustling part of North London into one of the most passionate couple of acres in the world. Without Billy Nick’s ideals and values Spurs may not have been the global attraction that they became over the duration of his leadership. We certainly would never have attracted the players from the various corners of the world who have graced the white shirt with such style.

The second quote was ‘borrowed’ from the MEHSTG website and credited to Martin Holleyoake. Its inclusion alongside the tributes just makes me laugh out loud every time I read it. “The day I will never forget was when Bill Nick took time out of his busy schedule to cast a glance at us two 11 year olds and say something so profound and meaningful. I can still hear his words now…. “Oi, you two, get out of the f****** goalmouth”.

Having read the book once, the short extracts and sub-chapter style of the book make it easy to dip in and out of, and there are enough key moments that its worth keeping the book to hand to remind, or teach younger fans of why we’re all here, why there’s a Tottenham way and more importantly why we must always remember the Bill Nicholson way.