When the Romanian forward Ilie Dumitrescu arrived after the 1994 World Cup, along with Jurgen Klinsmann, they came to a team who were six points behind the rest even before a ball had been kicked.  Manager Ossie Ardiles had been given the ammunition to fire Spurs back up the table and his attacking philosophy was suited to the use of these players, but there still remained doubts at the back, where Spurs were traditionally missing a dominating presence. 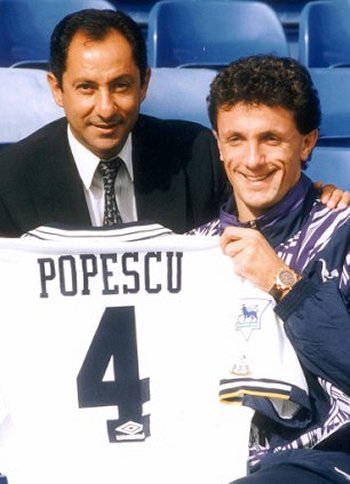 A few games into the season, a private jet arrived at a small airfield carrying a man who could have become a pillar of the defence for a long time, but the hope soon turned to salt, as Gheorghe Popescu didn’t become the talisman we had wished him to be.

Having started his career at Universitatea Craiova before moving up to crack Romanian side Steaua Bucharest for a short time, “Gica”, as he is affectionately known, made a name for himself in his home country.  He returned to his first club before he moved abroad to PSV Eindhoven in 1990, where he made great progress under Bobby Robson.

Back in Romania, he quickly became known as “Baciul”, which translates as ‘The Leader’ and it is this quality that Ossie had seen in him that lead to him signing the defender.  His addition to the side was hoped to bring some stability to a rear line that had been under fire despite the much-famed “Famous Five” attack.  Gheorghe’s ability to bring the ball out of defence and play as a proper sweeper in the system was seen as a double whammy in shoring up the defence and also adding to the style in turning defence into attack.

Popescu’s reading of the game could not be doubted and he saw things earlier than many others, thus leading to many a pass he made going astray, as the recipient had not guessed his intentions.  He often was able to break up attacks before they had even started and even though Tottenham were to go through a poor spell, he still showed he could defend at a different level to Kevin Scott, Stuart Nethercott and the young Sol Campbell.

His arrival saw him slip straight into the team for the 6-3 away win at Watford in the Coca-Cola Cup and then make his League debut at home to Forest.  Having lost the previous League games at home to Southampton and away at Leicester, Tottenham needed to get back on winning ways, but, with Stone having a stormer, Spurs went down 1-4.  It was a big blow from which it was hard to recover and a trip to Wimbledon was going to be a war.  Darren and Teddy’s corner routine worked a treat, but an equaliser left Tottenham searching for a winner.  As the ball was worked from the left, Klinsmann rolled a pass across the edge of the penalty area and arriving to thrash the ball low along the floor and past the keeper was … Popescu.  His eye to get forward was not diminished by the responsibility of the defensive duties and his passing was perceptive and accurate to the extent that he could have been Glenn Hoddle, as he produced a body shape to hit rangy passes.

But like accusations made against our current manager, the Romanian was said to be less than fond of the physical side of the game.  He was rumoured to be less than enamoured with the training regime and the fact that the games came thick and fast.  This especially came to the fore when Ardiles was moved out of the boss’ office and in came Gerry Francis.  The new coach’s lack experience of foreign play meant that he fell back on the staple diet of British training.  Running, running and running.  Popescu fell out of favour along with his compatriot Dumitrescu. 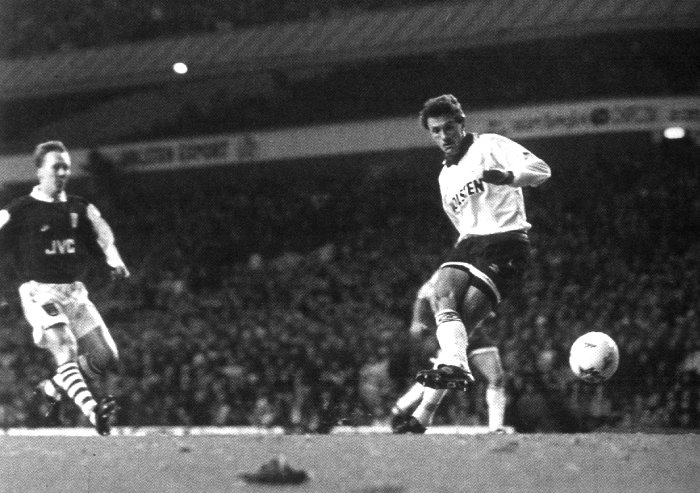 His contribution to the rest of the season can be gauged by his goals.  When Spurs beat Newcastle United at home, Teddy got a hat-trick and set up Gica with a neat one two for him to slip the ball home from inside the box.  The only other goal in his 23 matches for Tottenham marked him down as a player who will be long remembered.  While it had no bearing on the season as a whole, his goal against Arsenal will make him a Spurs hero.  Picking the ball up in his own half, it was played out right to Anderton, who sprinted down the line and squared it for Popescu to stroke the ball past Seaman to give Tottenham a 1-0 win in their first game of 1995 (see left).

Tall, elegant and stylish, this was never enough for the new man in charge and Gica didn’t even get to the end of the season before being sold to Barcelona, where he was re-united with Bobby Robson.  He became a UEFA Cup winner in his two seasons there and fitted well into the Spanish side.

On leaving Barca, he linked up with countryman Gheorghe Hagi (perhaps the only more famous Romanian footballer) at Galatasaray, where he joined Nayim in Tottenham history by scoring the final penalty in a shoot out v Arsenal in UEFA Cup final, to deny them a European trophy.

Four years down the line, he moved to Italy, where he turns out for Lecce in Serie A.  He is still scoring goals despite his advancing years.

The team Popescu came in to at Tottenham was not the one he left and his departure was the first of a few of that team that could have gone on to great things for the club.  Maybe his own game was not suited to the way that football is played in England and his fluid and languid style flourished on the continent, where the slower pace means that the physical side does not take such a toll on the players.  Having said that, Gica is still playing for his country at the age of 34 and he has 100 caps, despite falling out with various coaches during his 14-year international career.  If only he had been so willing to stay even a quarter as long at Tottenham.