While Bill Nicholson took the Spurs team of the late 50’s and early 60’s to great notoriety, the side which subsequently went on to be successful all over again in the 1970’s was not only Bill Nick’s, but owed a debt to another Spurs stalwart of the 50’s.

When Bill Nicholson played in the “Push and Run” side that won the Second Division championship in 1950 and then the First in 1951, players who were all skilled at their particular position in the team surrounded him. However, there was one who epitomised the ethos of Arthur Rowe and became his right hand man in charge of the team’s training when he took over as manager. That man was Eddie Baily.

Coming from the East End, Baily had to fight for what he wanted, but he also had a great sense of humour that made him one of the characters of the Spurs side and earned him the nickname of “The Cheeky Chappie”. He was first spotted paying for Hackney Schools in a match against Edmonton and although his side were comprehensively beaten and Baily himself was wearing glasses, the Spurs scout, Jim Joyce, who was watching, had seen clearly that here was one for the future. He turned up at the Baily household on the Monday and asked if Eddie was interested in playing for Spurs. He was only 13, but agreed and travelled to training on a homemade bike, with his gas mask hanging from his neck, as this was wartime and no chances could be taken. Now, Baily had always played as an inside forward and was naturally athletic. So much so that he played cricket to a high level and spent some of his summers on the ground staff at Essex Count Cricket Club. He trained under the Sergeant Major like Frank Hardy and played for the Junior side, sometimes through air-raids and other times having to leave the field while the planes flew overhead to come back and resume later.

These were not the glamorous days for footballers as they are now. At 14, he left school and followed in his family’s footsteps by going into the printing business and then he was loaned out to Finchley by the club to gain experience. By now, he was also looking to increase his income, so moved employment to the Stock Exchange, although I bet he never imagined then that Spurs shares would one day be traded at that very institution. His debut at the non-league club was very successful, with a win and a hat trick for the Spurs youngster. He even made it to Wembley in the Middlesex Red Cross Cup, where Finchley beat Southall 1-0, but it wasn’t as exciting as it sounded. Only 2,000 attended on a wartime midweek afternoon. But when he reached 17, he was offered amateur terms by Spurs. This came at just the wrong time, as soon after he left to undertake his national service, which took him to Belgium, Holland and Germany in the Scots Guards of all regiments. When the war ended, he stayed on the Rhine and played for their popular team. He drew much attention by nature of his displays and when a teammate who played for Chelsea asked if he was sorted out at home, he said no. When he returned to England, he trained at Stamford Bridge and impressed the manager enough to be offered an amateur contract with the Blues with a game that Saturday. 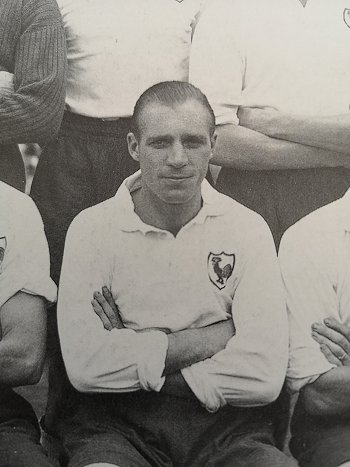 This is where fate took a hand. Walking down Tottenham High Road, he bumped into Jimmy Anderson from the club. Anderson asked if he wanted to play on Saturday for Spurs, but Baily explained that Chelsea had signed him. Anderson phoned the Chelsea boss and he understood that Baily was still on amateur forms with Spurs, so tore up his contract with the West London side. The young man was signed up on professional terms there and then. The £10 signing on fee was a factor, but he always wanted to play for Spurs so the decision for which one to play for between the two sides was an easy one. He made his debut against WBA on 14th January 1947, after only four reserve matches following his demob from the Army. He signed professional forms in October of that year and went on to establish himself in the side Joe Hulme was trying to take out of the Second Division. After a couple of seasons just outside the top four, Baily was to be the inside forward that characterised the team that the new manager, Arthur Rowe, was building.

Eddie was already noted for his accurate passing ability and his excellent first touch, especially on the quagmire pitches they played in in those times. He had the skill to create chances for colleagues, but also had dribbling skills that got him into positions to score with a fierce shot himself. When Rowe started to drill his side to move the ball quickly and move around to receive it again, Baily was his most devout advocate. In training he used to chant Rowe’s doctrines and developed a great understanding with Les Medley down the left hand side, which they eventually transferred to the England side. The Spurs side moved the ball around and took the Second Division by storm. They swept through the division taking the title and then did the same in the First Division, on a wave of fast, flowing football. Baily was at the heart of a lot of it and certainly played his part off the pitch, by maintaining a happy atmosphere in the dressing room. The player’s fondest memories were of three matches at White Hart Lane in a rain soaked period that saw them put six past Stoke City, five past Champions for the previous two seasons Portsmouth, and seven against Newcastle United. All in the space of four weeks !! Eddie got his only hat-trick for Spurs in the match against Portsmouth and it was the culmination of all they had worked for.

There is one incident that will always be brought up when people are talking about Eddie Baily and that is the Huddersfield “goal”. In a home game in the 1951-52 season, Spurs were awarded a corner, which Baily took. His kick was heading for the centre, when it struck the referee on the back and knocked him flat on his face. The ball rebounded to Eddie, who lobbed it back into the middle and onto Len Duquemin’s head to score the only goal of the game. The Huddersfield Town players went mad, as the player taking the corner had touched the ball twice and therefore, a free kick to the Terriers should have been awarded. As the ref had not been in a position to see who had crossed it, he gave a goal. The Huddersfield chairman rushed down at the end of the game to push reporters away from the ref because he “wanted him first” !! The FA called an inquiry and despite all the protests, the goal and the result was allowed to stand. It was a bitter pill for Huddersfield to swallow, as it meant they were relegated at the end of that season, but Baily’s quick thinking had won Spurs the day, albeit illegally.

After the Championship had come to Tottenham for the first time, there was no European football like there is today, but Spurs were to meet FC Austria four times in two years in friendlies. Well, friendly might not be the right term, as these games were considered to be the “Championship of Europe” as they were being played between the Champs of England and the Champs of the Continent. Of the games, Spurs won two and drew one against the side containing the best players that Europe could offer at the time. Cecil Poynton, the Spurs trainer, described the game played by the two teams in Brussels in 1952, as the finest display he had ever seen. But the team that took Tottenham to those heights was growing old together. By 1955, Baily was on his way to a six-month stay at Port Vale before joining Nottingham Forest, who he helped to promotion from the Second Division. When his playing career ended, he found his way back to the East End and became a coach at Orient, who again he helped to the First Division.

His England career spanned 9 matches and he was part of the 1950 World Cup squad that travelled home from Brazil in shame after losing to USA 0-1. He linked up with Les Medley in a partnership that has never been transferred to international level again. He also made an appearance for the Rest of the UK against Wales and five times for the Football League representative side. He was unlucky to be shown the door so soon, as he was still considered able enough to play for the national side against Young England in 1957. 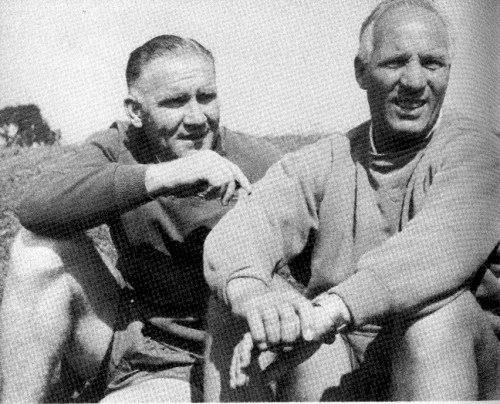 As the Double side that Bill Nicholson had built was reaching the same stage as the “Push and Run” side when Baily left, he called on Eddie to return to Tottenham as coach and assistant manager. He loved this role and while the players regarded him as somewhat of a Sergeant Major, he was always willing to have a laugh with them. One thing constantly bemused him though in the modern game. Having had to work hard for everything in his life, he found it amazing that some of the players coming through the team at Spurs were so laissez faire. He was frustrated at Graeme Souness, who he could not understand and he loathed Martin Chivers, the player who was moody and Baily could not get through to. However, after the first leg of the 1972 UEFA Cup final, he acclaimed Chivers, who’s two goals had given Spurs a great advantage, by saying he could “walk all over him” !! This time in Spurs history is chronicled in Hunter Davies’ “The Glory Game” and makes Baily out to be a dour, moaning authority figure, whereas he wasn’t like that most of the time. His success with Nicholson went on for 10 years, until, when Bill was sacked, he did not get the job and was out when Terry Neill came in. Disillusioned with Spurs, he went to West Ham on their scouting team and didn’t step foot back inside the Spurs ground until he played in a match prior to Bill Nicholson’s Testimonial.

It was fitting perhaps that Eddie was granted a testimonial in 1992 against Enfield, but it was at their Southbury Road stadium. It also came on the day that Spurs dispensed of the services of Terry Venables, just when the team seemed on the verge of going some way towards making a decent challenge for the Championship. Typical Tottenham – making two gaffes on the same day. But Tottenham were always Eddie’s club. He got married at 1 pm on 20th December 1952 and two hours later was playing for Spurs against WBA !! Not many would show such devotion nowadays. The Clapton born boy served Tottenham well through the years. Unfortunately, they, like they had done with so many others, did not treat him the same.