The Spurs Miscellany – The Ultimate Book of Tottenham Trivia 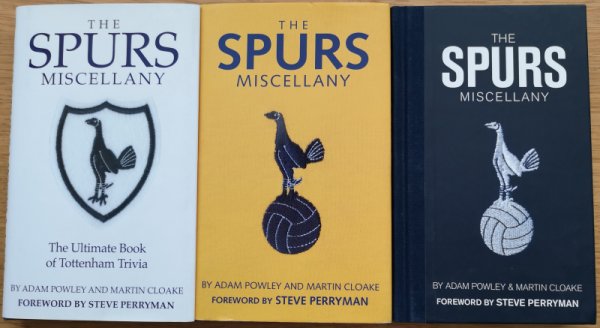 by Adam Powley and Martin Cloake

In the long line of miscellany books, this handy sized book has filled the gap in the market where the Tottenham Hotspur Miscellany should be.

From the classic crest from the Double season shirt (with other classic crest on subsequent re-prints) through to the in-depth research (including some from our very own site) gives a fact packed read that will inform, entertain and raise an eyebrow or two from even the most ardent Spurs fan.

Adam and Martin are both Tottenham fans who have a long line of writing behind them for Spurs fanzines, newspapers, other football mags and their previous outing in print “We Are Tottenham.”  Their latest effort is a collection of facts (I wouldn’t view any of the information in the book as trivia, as it is about Tottenham Hotspur) presented in an appealing manner that is readable and will act as a repository of Spurs-related detail.

There are features throughout the book on the Spurs ground, legendary players, memorable games and many of the stats you could want about the team’s performances.  The history of the club is covered with even an extract from the Domesday Book detailing what the village of Tottenham was like at the turn of the 11th Century.

As you would expect, there are many entertaining stories surrounding the club and some come straight from the mouths of the players and staff, which make for good reading.  My favourite concerns the meeting between Mike Tyson and Spurs supporting philosopher Freddie Ayer.  Let’s just say that “AJ” stood his ground against the World Heavyweight champion !!

My one quibble is that it would be difficult to find a particular entry in the book, but you accept that when you buy a miscellany, as you plough through it as you go, finding funny and surprising things on the way.  With all things Tottenham, it is a rollercoaster and this book is mainly full of the ups.  It is sub-titled “The Ultimate Book of Tottenham Trivia.”  While it is up-to-date to the start of this season, the “ultimate” tag can only be up to that point in time, as there are lots more stories to be written about Spurs, as Steve Perryman says in his foreword.