When it comes to writing the history of 20th Century association football, you can bet that the name of Steve Sedgley will not be writ large. But despite the lack of footballing impact he made on the game during his playing career, he will for ever be remembered for one thing and one thing only.

Yes, you must remember … it was at Chelsea, in the days when we used to win against them occasionally. Following a goal for Spurs, he ran along after the celebrating Spurs players and then he did it. He pulled up the front of his shirt and put it over his head, covering his face.

It was a moment of footballing genius. Never before had anyone seen this celebration and he ran around, totally blind as to whom he might bump into or fall over. For all the Ravanellis and Rivaldos who perpetrate this celeb, it was indeed our very own Sedge who invented it.

Coming to Tottenham from Coventry City a couple of years after he had been in the squad who beat Spurs in the 1987 FA Cup final (although he stayed on the bench during the 120 minutes of the match), he was one of the players that Spurs have had in recent years who was not sure which was his best position. Originally a midfielder, he sort of settled into defence for Spurs, although he did often like to forage forward with the ball after breaking down an opposition attack.

Steve was a local boy who had found a place in the Coventry side somehow. Our scouting policy obviously slipped up there (not surprisingly when good young players from the North London area are still being whisked off to other clubs) and it cost Spurs £750,000 to bring him back to the club he supported as a boy. It was a costly mistake. Steve was glad to return home and was part of Terry Venables new look side, although coming after the purchase of Gary Lineker from Barcelona, it made a few less banner headlines.

Never blessed with the greatest of pace, Sedgley made the most of his natural passing ability and playing at the back, he could show off his range of passes to the front men. Quite often, he made good use of playing the ball off our midfield and picking up the return before slipping a ball through the opposition’s defence. Playing alongside Neil Ruddock, he provided the more subtle play of the two, while Razor was left to exert his muscle. But Steve was also quite a tenacious tackler, who didn’t like to get beaten. His urging of his colleagues to greater efforts made him popular with sections of the crowd at Tottenham. 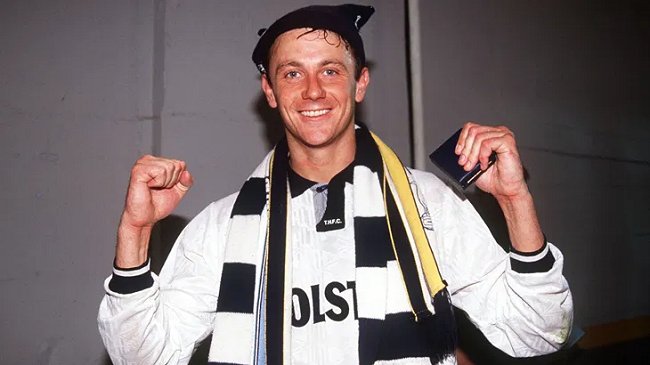 Having found himself out of favour at White Hart Lane, Steve moved to Ipswich Town for £1 million in 1994. He did well for the Suffolk side, although there was little success in those days with the side going down in his first season and he played out his time in the First Division, leaving East Anglia for Wolverhampton Wanderers. He became a well-loved defender there, before, last spring, being released from his contract. His injuries that had plagued him had taken their toll and he found himself a position at non-league Kingstonian on the coaching side. With the departure of the club’s manager, Sedge was thrust into the manager’s hot seat and has taken the reins of the Ryman League side.

But one abiding memory of the man who liked a laugh as he played his football is the one I started with. He made an impact, but most memorably as the man behind the celebration.