Up Front – My Autobiography 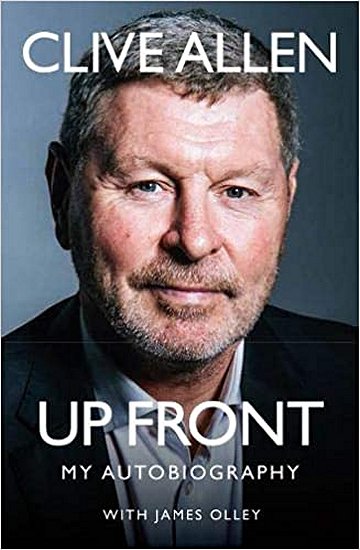 by Clive Allen with James Olley

To watch Clive Allen play through his career and especially his time at Tottenham when he was in his goal-scoring pomp, you would not think there was a torrid background to his life.  More than your usual autobiography, Clive lays bare his family life as well as the traumas he suffered during his time playing top level football.

There are the common tales of suffering injury and the depression of being away from the main group of players while unable to play,  the disgusting treatment by some clubs who no longer wanted him around and being treated like a commodity, the highs and lows of scoring or not scoring and the success or lack of it that brings.  But more unusually, Clive reveals the struggles within his family that dogged his life before, during and after he played the game.  It is, of course, a personal matter that you don’t expect to see aired in public while at the height of his fame, but it appears that the torment of a fractured family was always in the background.  Luckily, the support of his wife and his own family helped him through the tough times and vice versa for some of their own difficulties.

As often told in autobiographies, the sense of aimlessness when playing comes to an end, Clive struggled to find an outlet, taking in his NFL career (which, if you thought football was ruthless, will open your eyes) and then into coaching.  The differing ways that managers approached the task of taking Tottenham Hotspur forward are laid out, with some doomed to failure from the start.  Clive also sheds a lot of light on the workings (or lack of) the Director of Football post that Daniel Levy tried to introduce to English football.  Inevitably, the business versus sport argument causes an examination of the Tottenham Project, but at least there is a welcome back to the Tottenham family for Allen.  His experiences with the lack of humility shown by some colleagues in management is eye-opening, but the discord in his family is what is really revealing in this book.

The book is very readable and James Olley is a sympathetic story-teller, giving the book a flow that not only follows the life-line of Clive Allen, but of those around him, both professional and personal, that produces a frank and open account of the subject’s life.