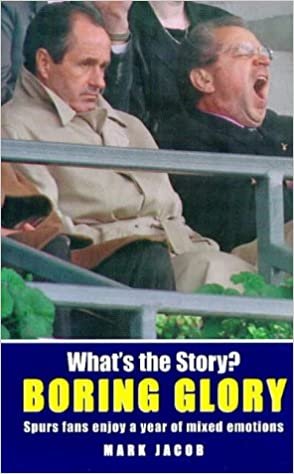 For all the mentions of DNA, lifeblood and genetic mutation, this is not a biology textbook. It is in fact Mark Jacob’s view of the 1998/99 season following Tottenham Hotspur. As many will know, Mark is involved in the Tottenham Action Group, who regularly comment on the goings on at White Hart Lane and he expands on the way the club is run and how it should be run within the pages of this book. The flier advertising the book calls Jacob “Chairman Alan Sugar’s most consistent critic” and you have to admire his “stickability” to the task. Like a dog with a bone he won’t let go in trying to return the glory, glory days back at the club. While Sugar probably regards him as a thorn in the side, the book portrays the author as something more akin to a whole thicket of brambles which the Spurs chairman may have to negotiate before being viewed as someone to believe in.

For each action the club make, the author looks at all the possible motives and doesn’t restrict his scope to Spurs, but to whatever is happening in the world of football. Conspiracy theorists may find certain aspects of this book compelling. While most fans are content to support their team passively, Mark takes a more “fan-power” view of the game and the reactions he provokes from Mr. Sugar are a real eye-opener. For those who like to get involved, there is plenty in this work.

The book is easy to read – capable of being absorbed in bite size chunks – as it is a day-to-day record and you think that many parts ring true, because there are areas which many fans would agree on. However, there are things I would take issue with Mark on, but then football is all about opinions, isn’t it ?? Whether or not you agree with all the author’s views on the club, the book acts as a reminder of what was a(nother) turbulent season for Tottenham Hotspur – on and off the pitch.